History of the Depot Museum

When the First United Methodist congregation decided to raze the Parsonage in 1985, the Historical Society was left without a home.

On October 17, 1985, the Pigeon Historical Society was reorganized as an entity of the Village of Pigeon under new leadership.

In March of 1986, a 99-year lease for the use of the renovated depot as a museum (now owned by the village) was negotiated.

The Depot Museum, as it is often referred to, occupies the former Pigeon Depot which was built in 1908 as a joint venture of the Pontiac, Oxford, and Northern and the Pere Marquette Railroads.

Although preparing the depot for a museum was a formidable task, with the encouragement of donations by several civic organizations and individuals, and financial support from the village and the township, Society members and other volunteers met the challenge.

The Grand Opening of the museum took place on June 2lst 1987, and dedication ceremonies were conducted on July 23, 1987.

The museum now displays over 2000 historical items – many dating back to the mid-1800s from past Pigeon businesses and the people who lived here. See the clothes they wore, the tools they worked with, and how their homes may have looked.

On October 8, 1989, the Depot Museum was designated as a historical site by the Michigan Historical Site Commission. Al “Butch” Robinson was in charge of the celebration. Butch was an outstanding, dedicated member who gave countless hours of his time and knowledge of local history to the museum. There is something of interest for all ages.

The Depot Museum is open to the public during the summer months.

In 1989 the Depot Museum was recognized by the State of Michigan as a historical site.

“The Pigeon Depot was constructed in 1908 and served two railroad lines. In 1883 the Pontiac, Oxford, and Port Austin Railroad, a north-south line, had been extended to Caseville and a depot was built at Berne, one mile north of here. Around 1886 the Saginaw, Tuscola, and Huron Railroad built tracks through the Tamarack Swamp and crossed the north-south line at this point. This railroad stop became known as Berne Junction. Berne’s population dwindled as people moved to the junction where they established Pigeon in 1888. The Pontiac, Oxford, and Port Austin Line became the Pontiac Oxford and Northern and later the Grand Trunk Railroad. The Saginaw, Tuscola, and Huron Railroad was absorbed by the Pere Marquette Railroad and then the Chesapeake and Ohio Railroad. The Pigeon Depot presently serves as the Pigeon Historical Society Museum.” 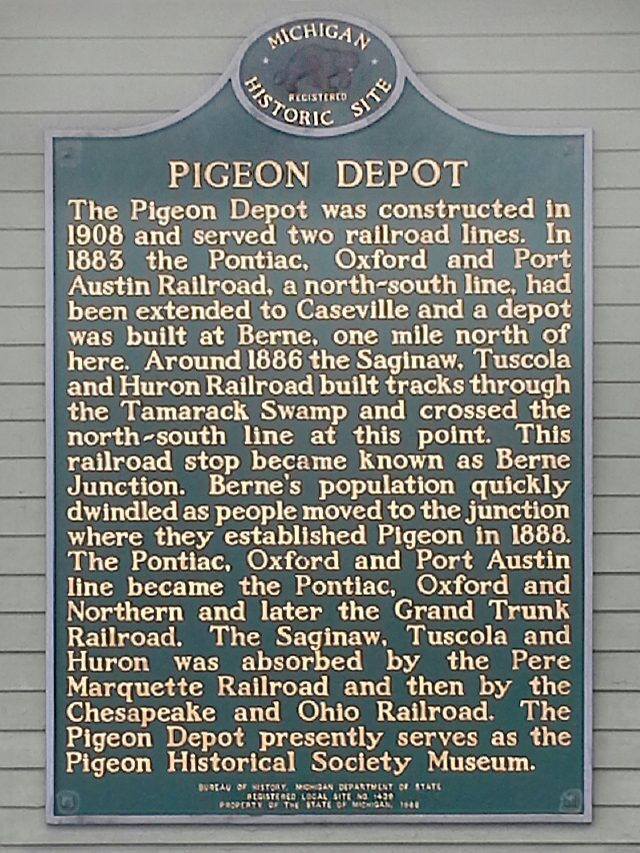 BUREAU OF HISTORY, MICHIGAN DEPARTMENT OF STATE
REGISTERED LOCAL SITE NO. L1439
PROPERTY OF THE STATE OF MICHIGAN

Check out upcoming events - click 'Current Events' above for information.